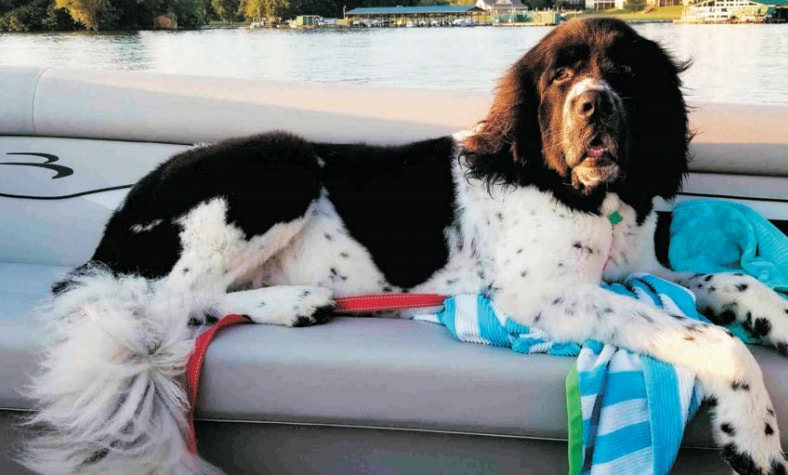 ​There are several things I have learned from this experience. The first is that Moses is one tough dog. He never cried or whined or after any of his surgeries. His sweet demeanor never changed. He went to every physical therapy session and always performed as asked. (Some of his at home sessions required lots of treats though). I learned that you need to always have a vet that understands the special care that a Newfie requires and that they are very much not a normal dog. You may have had a vet that you love who has cared for other animals, but they may not be the best for this dog. You must be able to trust your vet and rely on them for referrals when the care is out of their realm of expertise. You must ask questions and follow your gut when you feel something is wrong. Before allowing a surgery (or exam for that matter), ask about if they are equipped to handle a dog of a Newfie’s size. I learned the hard way that many are not. In fact, Dr. Blackford told me that she does not use any operating tables under a certain size, specifically because some animals are quite large and she wants to be safe. If you are taking your dog to a “teaching hospital” like UT, ask who will be primarily responsible for the care. I believe Moses had students handling him and they were not familiar with how heavy he is or just the large size and bulk in general. Several even stated that they had never seen a Newfie! I believe that either Moses was dropped while they were moving him while sedated or that he flipped off the operating table because he was so heavy. I will never know because the staff at UT has failed to ever give me an answer. Finally, I learned that I should have called some of you—breeders and SENC members experienced with Newfies—to ask questions when I just didn’t feel right.
Because UT failed to continue to care for Moses after his 2 surgeries there and because I had to get a second opinion and surgery, I filed a claim for damages with the State of Tennessee. I was awarded the cost of what I paid the breeder for him plus the TPO surgery, physical therapy, medications and the final surgery that Dr. Blackford performed. I did not want to file a claim or blame anyone. I believe what happened was an accident. Unfortunately, no one took responsibility for their negligence. I wanted UT to take care of the damage they caused. I was not trying to procure free medical care; I wanted my dog to be well. I am not sure I would ever use UT for a pet’s surgery again due to this experience. I would use their physical therapy again, as the care he received in that department was excellent.
I was asked to write this essay so that others could learn from my experience. I am happy to answer any questions anyone may have. In the mean time, if your Newfie (or any other pet) needs surgery and you are in the Knoxville, TN area, I highly recommend Lee Ann Blackford of Blackford Vet Surgery Referral. She and her staff are just the very best. She has provided excellent care for one of my cats and Moses. She is very skilled and is willing to confer with other experts to get the best result for your pet. She and her partners have a practice dedicated to surgeries and oncology only. Their website is www.blackfordvetsurgery.com.
There is a bright side to my story: Moses and I are more closely bonded than I could have imagined! He is the most loving, sweet, goofy boy ever. If it weren’t for the slobber, I would say he is just perfect!